Perfect for weddings or special occasions, this deep black leather dress belt is the ideal complement to your best suit. The sleek chrome buckle with matching keeper adds that hint of elegance to complete your look. Paired with your oxfords or dress shoes, this Solid Leather belt is guaranteed to enhance any man’s style.

The Belt
The Buckle
The Benefits 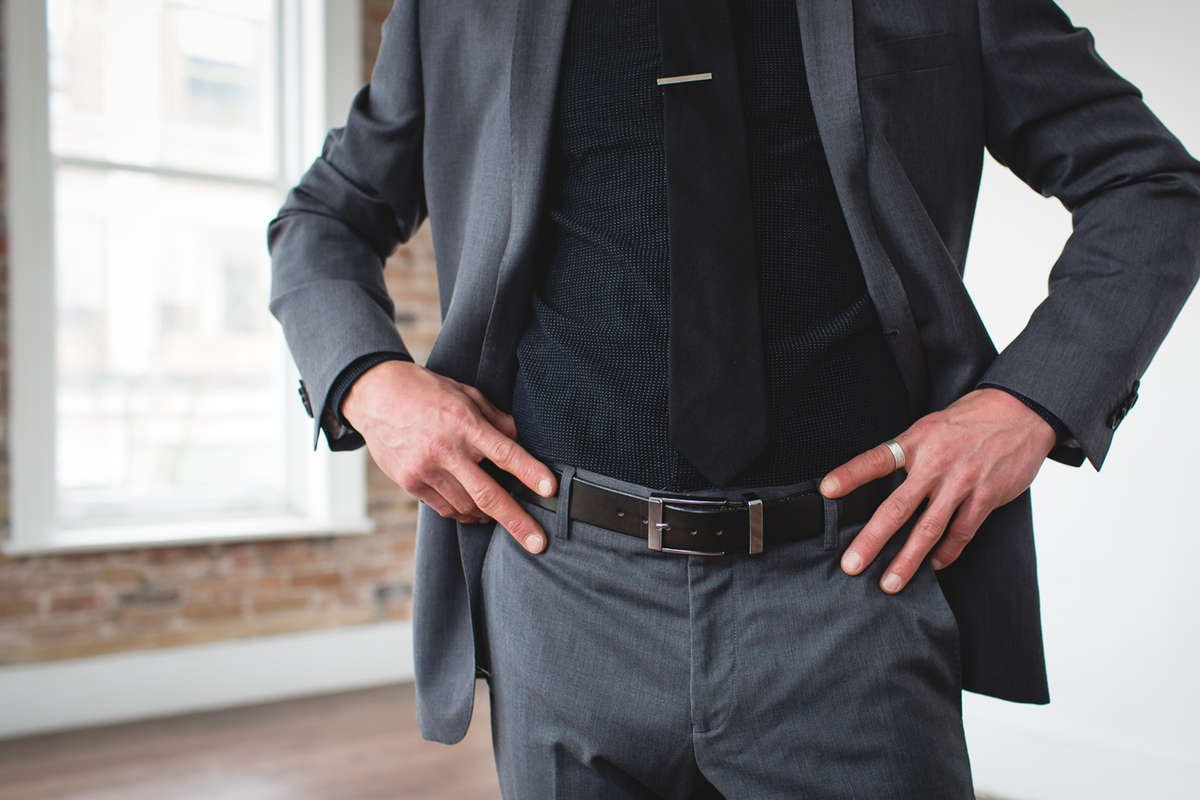 Formal | Black | Chrome
Perfect for weddings or special occasions, this deep black men’s designer leather belt is the ideal complement to your best suit. The sleek chrome buckle with matching keeper adds that hint of elegance to complete your look. Paired with your oxfords or dress shoes, this Solid Leather belt is guaranteed to enhance any man’s style. The belt is a Christmas gift. I will send a review in the new year. I can say that the service was friendly and efficient!

I just received my belt last week. It looks great and fits perfectly. I will definitely be back when I need another one.

Bought this as a gift- haven't given it yet but product shipped quickly and is sturdy and good quality.

Delighted with our purchase. Timely delivery.

Pleased that the belt was made by a true craftsperson in Ontario.

I purchased this as a birthday gift for my partner. He liked it very much. I'm not much of an expert, but it feels very nice. When I took it out to wrap it, I noticed that there were flaws in the dyeing process and it looked like a little bit of the dye pulled off on one of the edges. My partner says that he likes it, and that it gives it some character so I can't really complain? He likes the overall shape, width and tapering of the tongue/end.

We will need to have it cut a bit, as it is actually true to size. If I can give advice to anyone reading this- measure your waist and use that number! I know that it says so on the website, but we've always had issues with sizing from normal retail stores so I rounded up and went with the typical waist-size that my partner purchases... was a mistake.

The last thing was the custom monogramming. I opted out of this, and was surprised to see that the solid leather logo was still stamped onto the belt. It doesn't show that in the pictures. I felt that it took away (visually) from the belt- esp. since I ordered a formal belt and was expecting it to be entirely smooth and uniform throughout. It probably wouldn't look out of place on the casual belt, but I was a little disappointed at first at its placement and visibility on the formal belt. Beyond that, it is a lovely belt. Will have to see how it wears over time, but I have high hopes.

TL;DR - Nice belt, true to sizing, and it looks bespoke, flaws and all. Worth the money if you want to get your SO something special. There is monogramming on it that isn't shown in the photos.

Stay up to date with Solid events and promotions

Please Use Pant Size For Your New Solid Leather Belt

Determine proper pant size by using a pair of pants that fit well and could stay up without a belt. If unsure always, go with the bigger size. Like tailors, we can always remove material but can never add more.

DO NOT USE BELT SIZE

We use pant size to create a perfect fit. If you use the size from another belt our belt will be too big.


If you are still unsure or have any questions please reach out
https://solidleather.com/pages/contact-us